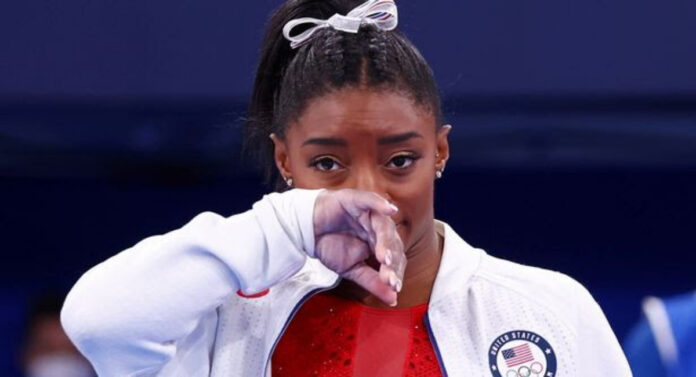 Simone Biles has hinted at retiring from gymnastics amid her mental health struggles. The icon endured a difficult campaign at the Tokyo Olympics, as she withdrew from several events to prioritise her mental wellbeing. The American was suffering from a mental block called “twisties”, the feeling of being lost in the air, making an athlete unable to complete skills to their usual ability.

She would return in her final event to win a bronze medal to go with the silver medal she earned in the all-around team event. While speaking to US Weekly as part of promotion for her Gold Over America Tour, which ended last week, the 24-year-old suggested her mental health challenges could force her to step away from the sport. “The mental aspect obviously got me during Tokyo and it’s, like, some of those things you can’t ignore, and my body didn’t ignore,” she said.

“If we can keep that under control, I would love to train again. But then, at the end of the day, if it costs me my peace, I’m going to step away. “And I’m completely fine with stepping away because I’ve been through so much. I’ve accomplished so much.” The four-time Olympic champion has also had to manage the trauma of the abuse she suffered at the hands of former USA Gymnastics physician Larry Nassar. In 2017, Nasar was sentenced to 60 years in prison after pleading guilty to child pornography and tampering with evidence charges.

His sentence was significantly increased after he was accused of sexual abuse by more than 330 women and girls, including Biles. The gymnast added: “Everything that I’ve been through with the organisation of USAG just makes for a sticky situation,” she said. “It just sucks. And it’s, like, I love the sport so much, but I feel like it’s just a hit to the gut every time something comes out or new information has been revealed.

“I love the sport. I love the people that I work with. I love the girls that I trained with, but those organisations, it’s just like — ugh! “It’s just like a huge dumpster fire that we’re trying to get rid of and that I’m trying to stay as far away from so that my mental health can be intact and if I do decide to train again that I have a clean slate.” Biles participated in the recently-concluded Gold Over America Tour, which was a celebration of powerful female athletes who represent the sport of women’s gymnastics and aim to inspire the next generation of athletes.

READ ALSO:   “We Get Had A Fights”- Simone Biles At This Point Am Not Sure Of The Wedding Plans...She Revealed At A Netflix Show

She admits the tour made it difficult for her to watch other gymnasts perform the moves that she has struggled with this year. Speaking on the Today Show last month, she tearfully said: “To do something that I’ve done forever and just not be able to do it because of everything I’ve gone through is really crazy because I love this sport so much. “It’s hard. I’m sorry.

And I don’t think people understand the magnitude of what I go through, but for so many years to go through everything that I’ve gone through having a front, I’m proud of myself. “And I’m happy I can be a leader for the survivors and bring courage to everybody speaking up, so I’m happy to be a voice for them. But we go through our own things. It’s hard.”