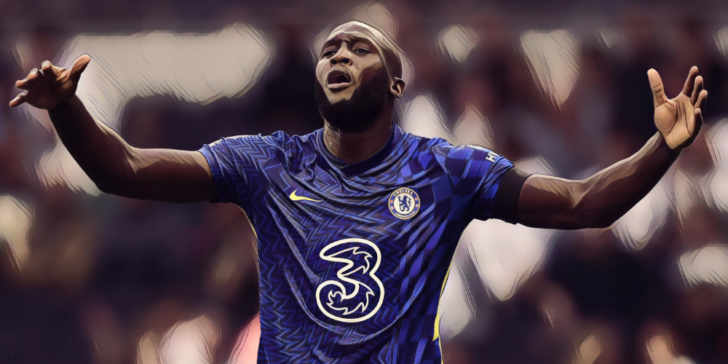 At the start of the Premier League season, Chelsea were the favorites to break the Manchester City-Liverpool duopoly and challenge for the title throughout the season. Yet despite conceding only more goal than City and two fewer than Liverpool, they’ve scored fifteen fewer than the former and twenty-one fewer than the latter. Clearly, Chelsea have a goal-scoring problem. After signing for the Champions League holders for £97.5m, much of that blame has fallen on the shoulders of Romelu Lukaku.

Last year, Lukaku wasn’t just a key player in Inter Milan’s title-winning squad. He was the talisman of the club, an icon in the blue side of Milan with a unique status among supporters, who gave him a level of adulation he has never found in England. That context is important. Throughout his career, Lukaku has seemed to be a player who needs to feel especially appreciated, and exist at the epicenter of a club rather than as a component. His price tag has meant that while he’s received plenty of attention in West London, it’s come with far more scrutiny and little of the warm support he received in Italy.

That lack of centrality to the team extends to his role on the pitch. At Inter, Lukaku was an ideal fit for Antonio Conte’s direct, counter-attacking approach. Free from the shackles of his target-man remit at Manchester United, the Belgian was given license to peel off in the right-inside channel to receive direct balls from Inter’s midfielders and centre-backs.

Conte fashioned specific rotations to isolate Lukaku against the opposition centre-backs where his pace and power would overwhelm defenders. He was weaponized to attack space or opponents in one-on-one situations, with quick vertical attacks that maximized his particular traits. His strike partner Lautaro Martinez could drop deeper to link play and make supporting runs around Lukaku, and the two developed a formidable striking duo.

At Chelsea, Thomas Tuchel’s tactical approach is quite different. The German instituted a possession-oriented 3-4-3 which enabled Chelsea to become a defensively resolute unit who could suffocate teams with their control of the ball. However, relative to how much influence they exerted on games, they often struggled to score goals.

Against deep-sitting defenses, much of their chance creation came from the dropping and rotation of the front three to pull gaps in the opposition defense and create space for the wingbacks in behind. This is why Kai Havertz was often deployed as a false nine ahead of the more orthodox Olivier Giroud and Tammy Abraham.

The former Bayer Leverkusen man was capable of both dropping off and making late runs into the box to feed off of pullbacks from the wide players. However, these rotations and movements were often too slow or not executed with the correct spacing to disrupt the opposition, meaning that Chelsea would control games without scoring.

The logic of buying Lukaku was that Chelsea would be able to change the gears from methodical build-up to a incisive, direct attacking play because of the qualities he would bring. Using his forward runs and tendency to play off the shoulder, they would be able to stretch teams vertically and the likes of Havertz, Mason Mount, Hakim Ziyech, or Christian Pulisic could feed him with through-balls. If teams sat deeper to deny such space, his movement and aerial ability would enable him to feed off crosses from the wingbacks or create space for others.

To an extent, Lukaku has been able to perform that role. He is a domineering physical presence in an otherwise technical yet somewhat slight frontline, meaning he can often occupy multiple players simply by being on the pitch. Yet on the whole, Tuchel has seemed unable to balance the cohesion of his system with getting the best out of the Belgian. He’s often isolated and forced to play with his back to goal to link play, and Chelsea’s slower attacks means his runs in behind are often not found.

It seems that Chelsea have persisted with the same strategies as last season with the wrong profile of striker. He doesn’t have the same freedom to peel off into the right inside channel and his transitional attacks — the prime source of his goals at Inter — have significantly decreased given Chelsea’s dominance of possession.

There is still time for Lukaku to find his feet at Chelsea, or perhaps more precisely, for Tuchel to workout how to tweak his attacking system to find Lukaku in situations where he can be most dangerous. But Chelsea didn’t want that. They wanted a striker to come in and immediately solidify their position as title challengers. Yet given their existing style, it was going to be difficult for any traditional number nine to adapt — especially one who was used to having the entire team’s image and style geared towards him.

Chelsea’s true mistake wasn’t purchasing Lukaku. It was targeting a striker at all. Tuchel has devised a controlling machine at Stamford Bridge, and rather than introducing new players in the final third to enhance it, they should have entrusted Havertz in the false nine role and trusted that Tuchel would eventually workout the best rotations and patterns to get the Blues scoring more.

Lukaku has fallen victim to Chelsea’s mistaken transfer aims. As he showed in the Club World Cup, he can still be a goal-scoring presence. Yet to unlock his ability as a truly lethal finisher, Chelsea will need to adapt: play more directly to find his runs in behind earlier, allow him to pull wide to the right inside channel, and rely more on transitions. That seems unlikely, though, and so for the time being, Chelsea and Romelu Lukaku will remain an uneasy and ultimately underwhelming combination.