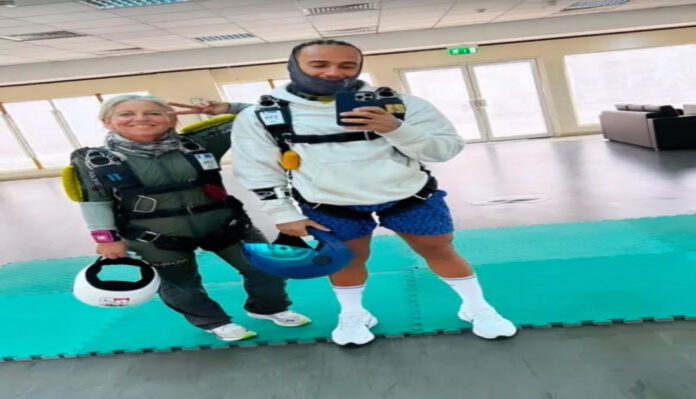 Lewis Hamilton has posted breath-taking footage of his most recent sky diving session during F1’s break weekend. Although there was no racing on Sunday, Hamilton showcased why he doesn’t just live life on the extreme on track by jumping out of a plane ’10 times’. Following a disappointing start to the 2022 season, Hamilton whisked off to Dubai to enjoy time off ahead of next weekend’s Australian Grand Prix. And in a now-deleted Instagram post, the 37-year-old revealed he had performed multiple skydives on Sunday to ‘clear his head’.

A video accompanied the caption, showing Hamilton, wearing just a t-shirt, shorts and helmet, leaping out of a plane and freefalling towards Dubai in different positions. The Brit must be well-versed in the art of sky diving, given he jumped without guidance from an instructor and safely landed.

He undoubtedly has plenty of experience after posting a sky diving video on his Instagram in May 2021. The caption read: “I’ve been learning to skydive over the past couple years. It’s one of my favourite things to do in my spare time. This me trying for the first time flying on my back of which I was useless at lol. After this I went to spend time in the wind tunnel to practice. I’ll post that next to show you my progression.”

On this occasion, Hamilton went thrill-seeking with social media sensation Naila and Mercedes worker Angela Cullen, whom he revealed was with him for her first jump. On Monday, the seven-time world champion and Cullen will likely be back to business, anticipating F1 hitting Melbourne next weekend. Mercedes will be desperate for an improved weekend after disaster in Saudi Arabia, where Hamilton was eliminated in Q1 before finishing 10th in the Grand Prix. The Silver Arrows are significantly off the pace of title contenders Ferrari and Red Bull, and hopes of a ninth successive Constructors’ Championship are already faint.

After controversy led to heartbreak in last season’s Abu Dhabi finale, Hamilton’s dreams of surpassing Michael Schumacher’s world title record are also under threat. But if Mercedes nail their development throughout 2022, you can never count Toto Wolff’s formidable machine out. The Australian Grand Prix hasn’t taken place in the last two years, and even with one of the best packages before that, it hasn’t been Hamilton’s favourite track. He has only won twice in Melbourne, most recently in 2015, but he will feel he needs to deliver an improved outing this time around.