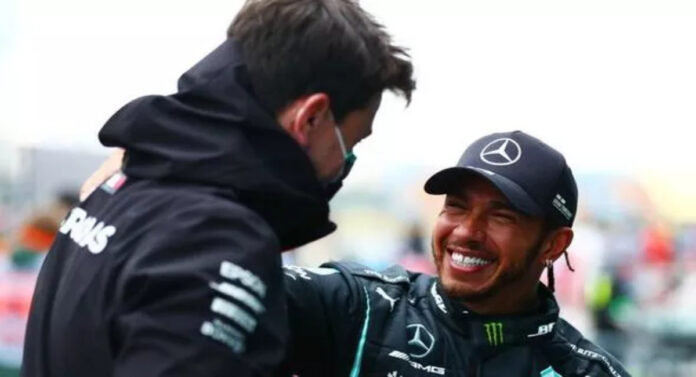 Mercedes team principal Toto Wolff has revealed that he holds a private “deal” in place with Lewis Hamilton which allows the driver to have some “freedom”. The partnership between Wolff and Hamilton is arguably the most successful driver-team principal relationship in the history of F1. In nine seasons together, they’ve won eight Constructors’ Championships with Hamilton winning six world titles to the one he clinched earlier in his career at McLaren. Both are the first to admit that they have locked horns behind the scenes before when tensions have been high in the team.

But recent years have seen the pair build up an even stronger working relationship, the point where reports suggested Hamilton’s decision to stay at Mercedes was tied to Wolff sticking with the team. Hamilton’s legendary status in F1 has earned him certain privileges with Mercedes other drivers may not have enjoyed. The 37-year-old is often seen traversing the globe just days before race weekends either attending fashion shows his clothing line is a part of or chasing his other passion in music. Wolff is accepting of Hamilton’s other interests and admits the pair have a “deal” in place.

The only requirement Wolff has of Hamilton to ensure that deal is not broken is for the British racing superstar to continue delivering at the weekend. “What I admire about Lewis is that he still wants to learn every day, as a driver but also as a personality,” he told De Telegraaf. “I have a deal with him. I give him freedom as long as he delivers. “In Japan last year he said he’d barely slept and played music all night. That day, he crushed the competition. In 2018, before the race in Singapore, he had a fashion show in Shanghai, went to Los Angeles and a friend’s wedding in England. “And that Saturday, he did the best qualifying lap I’ve ever seen.”

Speaking ahead of the new season, Wolff admitted that his relationship with Hamilton hit rock bottom in 2016 when Nico Rosberg beat his team-mate to the title. Hamilton was reportedly unsure of staying with Mercedes until Wolff held a face-to-face crunch meeting with the British F1 star in his kitchen over Christmas. “I said we need to decide whether we want to work together or not,” Wolff said. “You want to win as a driver, I want to win as a team. Sometimes our different agendas are going to lead to conflict and we need to decide whether we can cope with that situation.

“We were in my kitchen. I said to him, and Susie didn’t much like this analogy, that even though Susie and I might disagree about something, it would never come into my mind to divorce. ‘And it’s the same with you Lewis,’ I said. ‘I don’t want a divorce. You’re the best driver. I want you in our car and we want to provide you with the best car.’ “We kind of went into this discussion at loggerheads and then, after four or five hours in the kitchen, we found ourselves on a totally different level.”