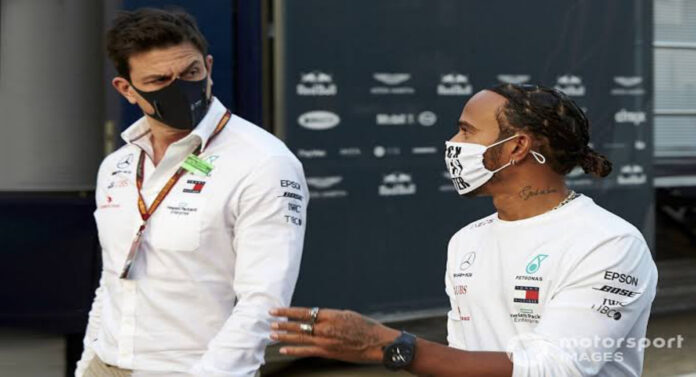 Lewis Hamilton has been struggling with his Mercedes this Formula One season. The British driver has not been able to adapt to the new regulations in F1. His results are directly affected by this, as he is only fifth in the overall drivers championship standings, having only finished on the podium once in three races. Moreover, Lewis Hamilton recently admitted that he is not enjoying the season at the moment. But that doesn’t mean that the seven-time world champion will give up along the way, according to Toto Wolff.

“He still has many years left”. “Will the car demotivate Hamilton? I see where you are going with this.” says Wolff when questioned by the press in Australia, “But Lewis is dealing with it in a positive way. We are trying to strengthen each other. You can only leave if you don’t like what you’re doing anymore, but Lewis loves doing this. “He’s in fantastic shape, his life is very rich but extremely disciplined and he’s got many years left,” the Mercedes boss said.

For Hamilton, some are questioning if he does have the motivation to remain in Formula 1, with more complaining over the radio. That said, the team result today for Mercedes was incredible really. With George Russell in second place in the title race, even Hamilton had to acknowledge the race in Melbourne was a good outcome for the team. “It’s a great result for our collective, honestly,” he confessed.

“This weekend we had so many difficult moments with the car and finished fifth and sixth in qualifying, having progressed as we have done, with the reliability we have, it’s unbelievable. We certainly didn’t expect to be third and fourth.

“George did a great job – I got to see his battle against Pérez a bit and I wish I had been there, but nonetheless, we’re going to take those points and keep pushing, “I couldn’t fight for third place because the engine was overheating so I had to ease off and stay behind, but we got as many points as we could in the team and that’s great.