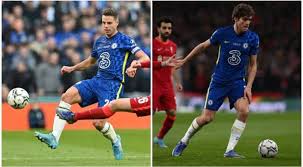 Chelsea have been handed two major boosts ahead of their Premier League matches this week.

This comes as their two Spanish defenders in the persons of Marcos Alonso and Cesar Azpilicueta, have rejoined the rest of the team.

Both Alonso and Azpilicueta were unavailable during the Blues’ last two matches, against Luton Town and then Burnley.

While Azpilicueta suffered from an injury, Marcos was out with Covid-19.

The Blues have, however, won their last three Premier League matches without conceding and would be making a trip to Carrow Road on Thursday, where they will face Norwich City.

After which, they will host Newcastle United on Sunday at Stamford Bridge.

The return of Azpilicueta and Alonso means Chelsea manager Thomas Tuchel will have to rotate many of his players for the two matches as everyone on his squad is available for the matches except for Ben Chilwell, who has also returned for training but is still unfit to play any game.

In another report, Chelsea are seated at the third spot on the EPL behind Liverpool and Man City.