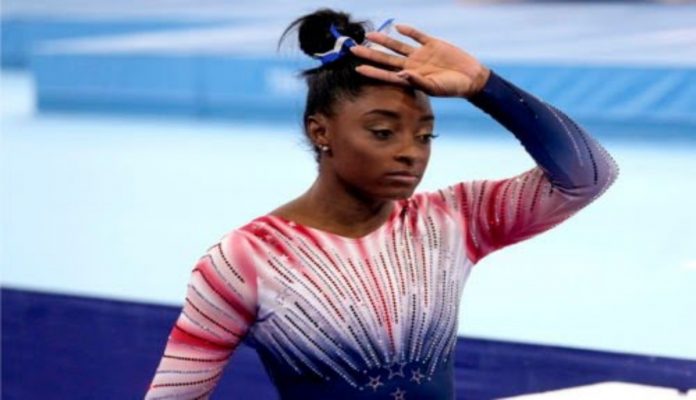 Simone Biles, a world renowned gymnast, is widely recognized for her audacity in attempting risky moves and for expressing her ideas on issues that call for change. The gutsy and outspoken Olympian gymnast, in a 2021 interview, opened up on a seemingly trivial issue but hugely impactful on the overall performance of a gymnast- food the gymnastics training camp provided.

Fair to say, the seven-time Olympic medalist, besides proving her dominance and the extraordinary things a gymnast can achieve in the sport, has also made a difference by bringing to the limelight many issues that have been simmered for a long time. In the interview, she shared that she had to steal food as the gymnasts were underfed in the training camps.

Biles trained once a month at Karolyi Ranch in Texas ever since she was 12 under the supervision of Martha and Bela Karolyi. The food provided was insufficient, and it left them hungry. Moreover, the food the gymnasts consumed was strictly monitored. Hence, they had no choice but to find food elsewhere.

Feeling safe that she can no longer get into trouble for revealing it, she opened up on something she “never told that to anybody.” She recalled, “But, like, there would have been nights where we would break into the cafeteria and go get food.” It was also reported that the gymnasts were subject to frequent verbal abuse of their appearance -weight, and size. Also, they were “underfed and lied to or misled about the severity of their injuries.” Recounting those days, the seven-time Olympic medalist remarked, “not the right training.”

In 2018, Simone made a huge leap by opening up about being abused by Larry Nassar, then a doctor with USA Gymnastics. After she and her team testified about the abuse, he was charged with 175-year imprisonment. According to the gymnastics icon, the committees failed to secure the interests of the gymnasts. How about allowing any future daughter to compete in the sport if the system remained the same? She replied, “No. Because I don’t feel comfortable enough.” They have neither taken accountability for their actions nor ensured it would never happen again.

By withdrawing from the 2020 Olympics, she stood up to prioritize her mental health. Since then, she has not competed in high-level events. Rumors about her participation in the 2024 Olympics in Paris are in high gear. However, her 2023 wedding is what fans are most looking forward to.