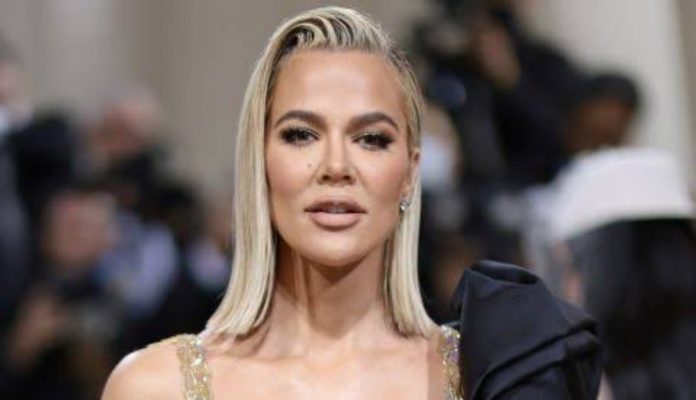 Khloe Kardashian gave a peek of her busty new look as she attended the CFDA Awards on Monday, seven months after admitting she wanted a boob job to get cleavage like her famous sisters. The reality sensation, 38, flashed some serious underboob in a daring copper cutaway LaQuan Smith dress as she attended the New York City event alongside her siblings.

She rocked a sleek bun, smoky coat of eye shadow, and long full lashes that helped bring out her hazel eyes. A light dusting of pink blush further brought out her natural beauty while a coat of matte lipstick coated her lips. She was looking sharp with her long, claw-like nails done up in a shade of baby pink. Khloe also shared the spotlight with her big sister Kim Kardashian, who wowed in a sheer plastic dress that displayed her legs. Kim is set to receive an award on behalf of her wildly successful shapewear brand, SKIMS.

The appearances comes not long after a recent episode of The Kardashians saw Khloe admitting she was considering getting a boob job to measure up to her statuesque siblings. ‘I’m really contemplating getting my boobs done,’ she told her mom Kris Jenner. ‘I’m wearing a latex top with like a bra top so they look great right now and I wish they looked like this all the time,’ she admitted in a confessional.

‘I just want fuller like when you see me in a bikini I don’t have like cleavage. Like my sisters have this ample cleavage and it’s like… I don’t know. You just gotta see em without this top on. That’s for another show.’ Khloe also got more specific about what she really wanted out of a boob job during the episode’s tiny post-credit scene. Khloe is seen in confession playing with ‘bra stuffers’ not full breast implants.’

As the duo got ready for an appearance on Jimmy Kimmel Live, Khloe gets into the boob job topic once again. The reality star is seen cupping her breasts whilst clad in a strapless hot pink top. ‘This is what I want all the time,’ she says, adding she was going to get a ‘consultation soon.’ Surprisingly, when Khloe says she’s having a consultation for ‘chichis,’ Kris says, ‘No,’ but Khloe insists, ‘Mom, it’s a consultation.’

‘No. You’re perfect the way you are, Khloe,’ Kris says, as Khloe replies, ‘Thank you mommy. ‘You go down this implant road, and it’s not always…’ Kris says, though Khloe insists, ‘I’m not doing a Pam Anderson situation. It’s literally what I was before I lost… I just want a little… you know what, I’ll call you later.’