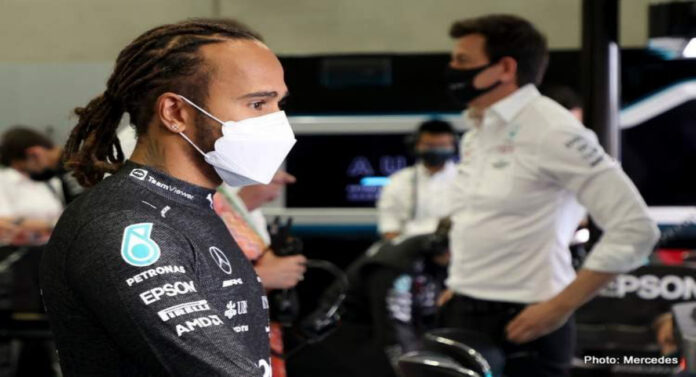 Mercedes’s troubles this season seem to continue, as the team are enduring another difficult weekend in Italy, for the 2022 Emilia Romagna Grand Prix at Imola. Friday saw the team produce their worst qualifying result since the 2012 Japanese Grand Prix, where the team was still in the process of rebuilding towards 2014’s turbo hybrid era. They qualified 13th and 15th with Michael Schumacher and Nico Rosberg respectively that time.

Fast forward to 2022, and after years of success and domination in Formula 1, the team qualified 11th and 13th with George Russell and Lewis Hamilton respectively, as they failed to capitalize on the wet conditions that prevailed over the session. After the session, the TV feed showed Hamilton and Wolff have an intense discussion in the team’s garage, that went viral suggesting cracks are showing in the pair’s strong relationship.

Hamilton commented on the incident simply saying: “That’s all internal stuff, so I won’t share that.” However, Wolff spoke of the incident in some detail later and said to Sky Sports: “There was no disagreement at all. “It doesn’t go any closer like the two of us are,” Wolff added. “We were just so angry about the session overall, him and I, and he vented at me, I vented at him but it was absolutely about the same thing.

“It’s just a degree of frustration that we are not able to generate the grip on the first lap and yesterday was all about first lap. “Then it red-flagged and we weren’t able to make it into Q3 and it’s so frustrating,” Wolff lamented. Mercedes finished the Sprint Race at Imola 11th with Russell and 14th with Hamilton, which puts them in a tough position for the race on Sunday. “What we saw today was a car without enough of a performance differential to the midfield cars to make the overtakes,” Wolff said after the Sprint Race in the team’s press release.

“If we were running in free air, the picture would be similar to previous races where we moved forward but behind the cars in a DRS train, the car didn’t have enough performance to make progress. “Point-scoring needs to be the minimum for tomorrow and we know that isn’t any where near our expectations, so it’s a humbling experience,” the Mercedes boss added. “We understand our problems, we have a direction to unlock the potential that is within the car to bring us much closer to the front but at the moment, we don’t have the key.

Therefore you just need to grind away and rely on the science and the physics. “The passion and determination to improve is there in every team member,” the Austrian insisted.