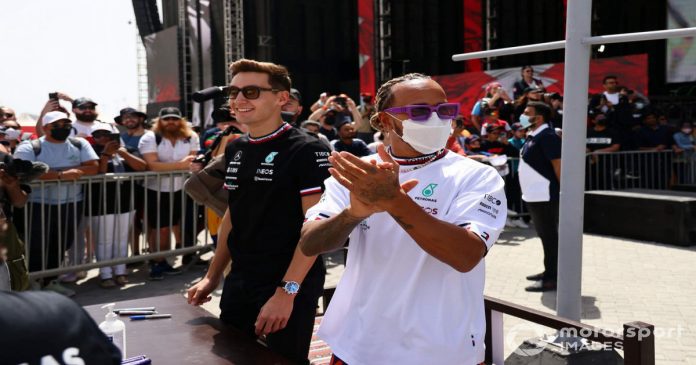 Russell was promoted from Williams to a race seat at Mercedes during the off-season to replace Alfa Romeo-bound Valtteri Bottas as Hamilton’s new team-mate. The Briton immediately made a strong impression at Mercedes, aided by the fact that he has been associated with the Brackley team for years.

But few would have predicted that the 24-year-old would outscore Hamilton in all but one race so far, and he also leads his illustrious teammate 4-3 in qualifying. While Hamilton initially struggled to get the most out of Mercedes’ W13 car, the seven-time world champion appeared much more at ease when the team had its wild bouncing issues under control in Barcelona and managed to start running its car the way it was intended.

Team boss Wolff believes that only bad luck is keeping Hamilton from matching Russell on a regular basis. In Monaco, Hamilton lost out to Russell in qualifying after his last flying lap was aborted due to a red flag and was powerless to move up in the race. That followed contact with Haas’ Kevin Magnussen in Spain and several instances earlier in the season in which an ill-timed safety car ruined his strategy.

When asked if Russell beating Hamilton had become the norm now, Wolff replied: “No, I think when you look at the bad spells that Lewis had, I mean, look at the race: stuck again. “Contact with Esteban [Ocon], stuck behind Fernando [Alonso], the red flag in qualifying, and I think the pendulum will swing. “So [once] these unlucky situations stop with Lewis, they’re very much on the same pace. [During] one practice, one leads and then the other one. And that is great.

“Also they work together in order to get our car straight, because we need to get our car straight.” After struggling to beat the likes of McLaren and Alfa Romeo early on due to its porpoising limitations, Mercedes now appears to be the clear, third-fastest team on the grid. Wolff admitted third in the standings is “where we belong but not where we want to be” as F1 heads to Baku next week.

“Our team is only third on the road and that’s why the positions are fifth and sixth,” he said. “This is where we belong but this is not where we want to be and that’s why if you’re inheriting a podium that is nice. It’s good for the points long-term but I don’t want any of that. “I want to be part of winning at the front, and these are important lessons that we learn here and it’s going to be the basis for us performing long-term again.”