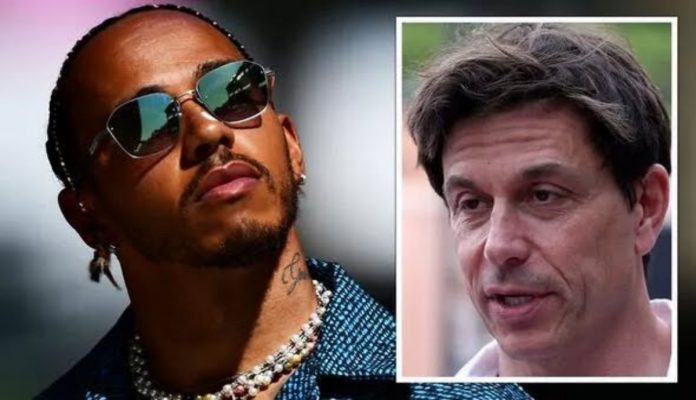 Lewis Hamilton has hit back at claims his F1 career is finished amid claims Nyck de Vries could replace him at Mercedes if he walks away from the sport early. Hamilton has struggled for pace this season as Mercedes are the third-fastest car on the grid. The seven-time champion has also found it hard to match his new team-mate George Russell across the first seven races. The poor Mercedes form has left many to question Hamilton’s future in the sport, with a record-breaking eighth world title more or less out of the question this year.

However, ahead of the Monaco Grand Prix, Hamilton issued a simple four world response to doubters when asked how long he wanted to remain in the sport. When asked if he would carry on until he was 40 by Corriere Della Ser, he simply replied: “Why Should I Stop?” The 37-year-old also said on his future: “Let’s take this season: I probably won’t win the title, but I feel the same pleasure of competing as when I started. Maybe one day I won’t be able to take the pressure anymore, I’ll be tired, but that day hasn’t come yet”

Hamilton has addressed the retirement rumours on multiple occasions already this season. At Imola, Hamilton posted a cryptic social media message claiming he would decide when his ‘masterpiece’ was finished. The Mercedes star even admitted it was not in his DNA to quit down to a tough set of circumstances.

He explained: “I’ve been with Mercedes since I was 13. We’ve had amazing times together. We’ve ridden the highs and lows together. I am 100 per cent committed to this team. There’s nowhere else that I want to be. Just because we’ve hit a rough patch, it’s just not in my DNA to back out.”

This week questions over Hamilton’s future have ramped up after former World Touring Car star Tom Coronel claimed Mercedes has an ‘insurance driver’ in place. He believes Former Formula E champion and Mercedes reserve driver de Vries would take Hamilton’s place if the Brit walks away. Speaking to RacingNews365, Coronel said: “If Lewis Hamilton stops, Nyck de Vries will get the seat. Do you know why? As I’ve been saying for a year, Nyck is Toto Wolff’s insurance policy.”

Last month, former F1 world champion Jacques Villeneuve also weighed into the argument, questioning whether Hamilton will be at Mercedes at the end of the season. Writing for Formule1.de, he said: “Will Hamilton still be there in two, three years? Will he even reach the end of this season?

“You can’t see into someone’s head. You can be down and depressed or you can be unable to deal with no longer winning. Then maybe it’s time to decide life is better without racing.”