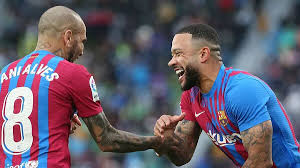 Barcelona’s winning run has been stretched to four after a 2-1 victory away to Elche – although it was much more of a struggle than recent matches.

The Estadio Martinez Valero was sold out for Barcelona’s visit to the south-east of the Valencian community, but Elche were not there to spectate either.

A strong tempo characterised the start of the match, as both teams translated the electricity from the stands into energy in the opening minutes. Elche didn’t want to defend on their own box and were aggressive about keeping that stance, leading to a tightly packed midfield.

Neither side managed a firm grip on proceedings but Barcelona did find their through that mid-block once or twice, with Ousmane Dembele passing up a good opportunity, his chipped effort batted away by Edgar Badia. Chance smiled at Frenkie de Jong and invited him to score from close range – only for his shot to seek out defender Diego Gonzalez on the line.

? A key clearance from Diego Gonzalez to prevent Frenkie de Jong, as @Elchecf_en take the lead just before half-time.

De Jong would get in-behind again, only to be thwarted by Badia this time. This was part of slug between both sides though. Elche were streaming down the left side at every opportunity, causing havoc for Dani Alves’ ageing legs. One of these forays eventually found its way to Tete Morente in the box, who grazed the bar.

As the break scurried into sight, a bizarre clearance from Pedri left Fidel Chaves in behind Alves. Like an expert marksman, Fidel drew close and fired across Marc-Andre ter Stegen to open the scoring.

Manager Xavi Hernandez began tweaking his recipe and added Ferran Torres to the mix at the half. A move which ultimately paid off, as Dembele’s ball found its way to Ferran inside the six-yard box via Jordi Alba. He did not pardon Elche.

Yet he would do so on numerous occasions afterwards. Despite the intensity of Elche’s defence, Barcelona continued finding ways to slip in behind and Ferran had four more very presentable opportunities.

When it seemed as if Elche might survive these frights, a penalty – confirmed by VAR – made the difference. Another substitute, Memphis Depay, dispatched it in the 85th minute with venomous effort into the top corner.

A late Elche push caused Barcelona problems but through a combination of good defending and good fortune, didn’t cause any clear chances.

Both managers had their own reasons for satisfaction by the end of the match, but on an afternoon where Barcelona spurned several excellent chances, Francisco ended up with the frustration.

Xavi’s changes worked. Barcelona functioned once more. They move into third place and their season swings into gear.